I was up at 4:30 AM. loading my cooler, and making sure I had everything I would need (or so I thought). By 6:15 I was on the road. The route I had chosen took me up New Mexico SR 44 (sometimes referred to as US 550). I made a quick stop at the Cuban Cafe in (where else?) Cuba, NM for a hand-held breakfast burrito, and I was off again. SR 44 crosses the northwest plateau between Cuba and Bloomfield where it drops into the San Juan River valley.

At Bloomfield I took US 64 west through Shiprock, where I entered the Navajo Nation. Shiprock is the remnants of a dormant volcano, and is  sacred to the Navajo people. I made this image as I drove past on Hwy. 64.

The road now dropped into Red Valley, and I was soon across the Arizona border in the small village of  Tec Nos Pos. From there it was a short drive to Kayenta: the gateway to Monument Valley. As I topped a rise before entering the town I saw an amazing vista off to the north, and I stopped to make this image of more exposed lava plugs similar to Shiprock. Monument Valley lies beyond the distant spires, about twenty miles to the north.

I made another stop in Kayenta for gas and some lunch, and then I continued on to the west until I came to Arizona State Road 98, which angles northwest past the small villages of Shonto and Kaibito. It was here that I noticed another change in the geology of the landscape. I began to see a lot of eroded, cross-bedded sandstone, so once again, I found myself parked by the roadside composing a photo. This image was made just north of Kaibito, and I was getting pretty excited because I was now very close to the Glen Canyon Dam where I would cross into Utah.

As I entered the town of Page, Arizona, I drove past the Navajo Generating Station, a coal–fired power plant which has three 236 meter tall chimneys that emit close to 20 million tons of CO2 into the skies of north–central Arizona, and south–central Utah each year. This photo shows the plant as it is seen from the Wahweep Overlook. Soon after I made this image, I crossed into Utah, and the Grand Staircase Escalante National Monument, a place I have wanted to visit for years, and here I was, driving through it on my way to somewhere else 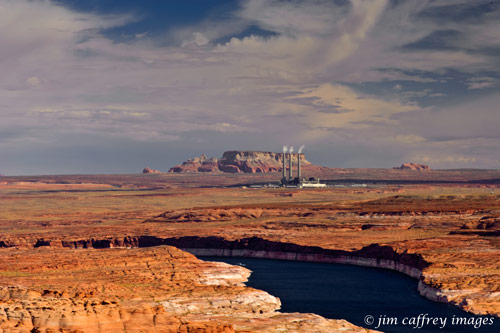 Next stop, Kanab, Utah where I would have to detour back down into Arizona before I reached my final destination. As I neared Kanab, the overcast became a black curtain, and the rain came down in sheets. It was pretty intense for about fifteen minutes, and then the rain stopped as suddenly as it began. I pulled over to the shoulder to look behind me at the storm as it moved to the northeast. I took this photo on the yellow line of Utah SR 89 about ten miles east of Kanab. 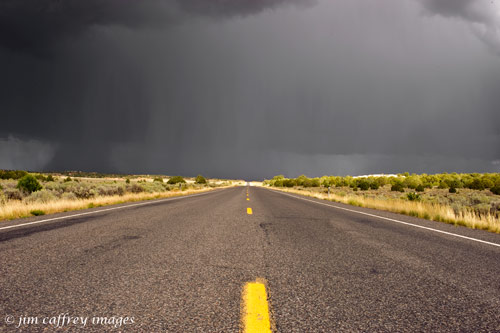 I continued down the two–lane blacktop through the town of Kanab, and back down into Arizona where I headed west once more from the small town of Fredonia. I was getting really close now, I was also getting weary. I had been on the road for more than twelve hours. At Colorado City, Arizona, I crossed back into Utah, and stopped just a couple hundred feet over the line the make another image.

Twenty miles to go, and the sun was getting low in the west. I could see the town of Hurricane, Utah as I drove past what would become my last image of the day. It had been a long day, and I had journeyed through some beautiful country, but the fun was just beginning! 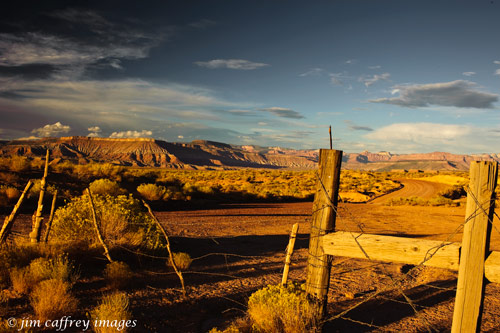 This entry was posted on October 4, 2010 by Jim Caffrey Images. It was filed under Journal, Landscapes and was tagged with Arizona, clouds, desert, Photography, sky, Utah.