The Wind, the Dust and the Bisti

It had been a couple of years since I last made the trip to the Bisti Wilderness. The Bisti is located in northwestern New Mexico between Farmington and nowhere; getting there is an adventure in itself. Last Sunday morning we began driving up US 550 past Cuba with the intention of going to Chaco Canyon, but the weather grew increasingly worse. The overcast spread until it formed an impenetrable curtain, which blotted out the sun. The wind began to gust, lifting the sand from the great expanse of the San Juan Basin, carrying it high into the air, adding to the dome of the darkening sky.

So, we just drove on past the turn off to Chaco. I guess I knew I was heading for the Bisti all along. When we arrived, the wind was blowing even harder, and the air was filled with swirling sand. We never went more than a couple of hundred yards from the car, but we were intrigued by the possibilities nonetheless. Every so often the sun would make an appearance through an opening in the clouds; we continued to make our short sorties into the landscape, and then back to the car for a respite from the wind and sand. 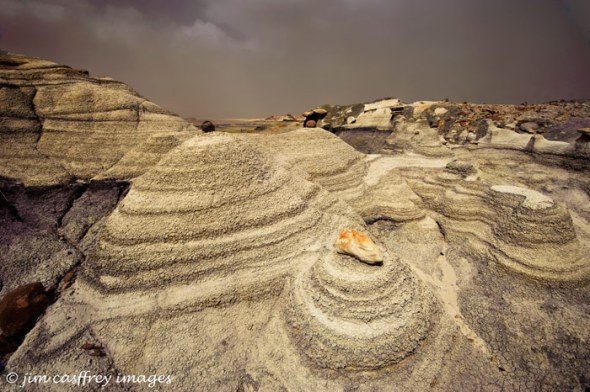 I made this image not fifty feet from the road. Just north of the small parking area at the foot of Alamo Wash there is a large deposit of eroded bentonite (minerals dissolved in a clay matrix). They are formed into small hills and many of them have these small stones on top of them; they look like offerings to some unnamed god.

At one point we pulled into a small parking area on the west side of the road, across from the main section of the wilderness area. The wind continued to howl, but we decided to venture into a draw that looked promising. Behind a large dome shaped hill, we discovered a garden of unearthly delights: sandstone and mudstone forms that seemed to go on endlessly. We were somewhat protected by the hill and the strange geology around us, so we stayed a while, exploring and making images. 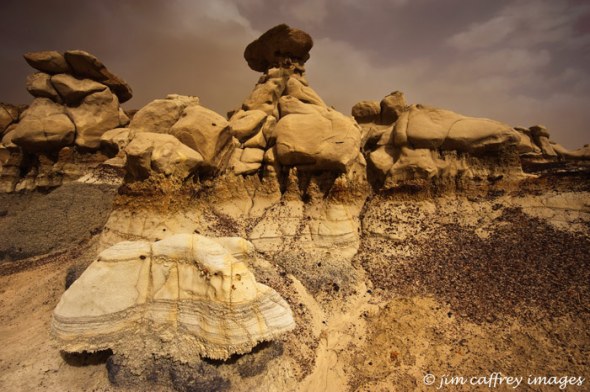 I was hoping that the storm would abate. I wanted to hike out to the Egg Garden, but it’s more than a mile and a half from the parking area, the route is totally exposed, and the darkest part of the storm was centered over its location. The garden is an iconic location in the world of landscape photography. I made this image the last time I was there in 2009.

So, we continued to explore our newly discovered garden, taking shelter, when necessary, behind the strange monoliths. We spent a total of a little more than an hour dodging the sand and taking photographs.

But, the weather steadily deteriorated; the wind blew harder and the sand was stinging our eyes. I took these last two photos about five minutes apart. The sky was threatening rain. We made our way back to the car to leave, but only a few scattered drops fell as we drove out on the dirt road that is the only access to this incredible wilderness area.