A Stroll Through Ricketts Glen (Part2)

After spending some time at Waters Meet, we crossed the bridge and began the climb up through Glen Leigh. This leg of the hike was a true test of my stamina–a seven hundred foot elevation gain in a little over a mile. The beauty of the place fortified me though and we had barely gotten started when we came upon Wyandot Falls. 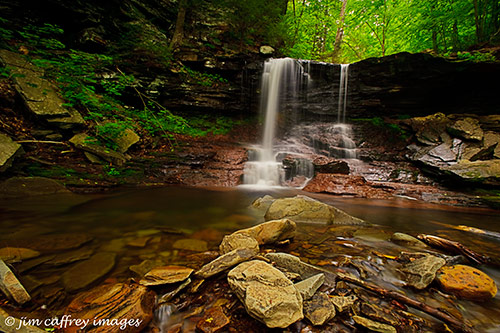 And a little farther on we discovered this beautiful unnamed cascade which I dubbed Tranquility Falls. 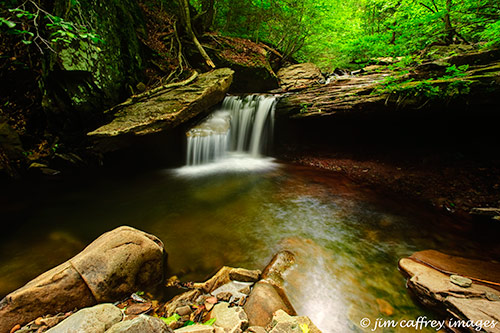 I had the sense that Glen Leigh was much narrower and steeper than Ganoga Glen, but after studying a topo map of the area I discovered that they are both about the same near the bottom, but Ganoga does flatten out a little near the top. As we continued up the deep green canyon, we passed B. Reynolds and R.B. Ricketts Falls, and then came to Ozone Falls which, at sixty feet, is the highest waterfall in Glen Leigh. It cuts a graceful curve as it descends over the many layers which define its classic form. 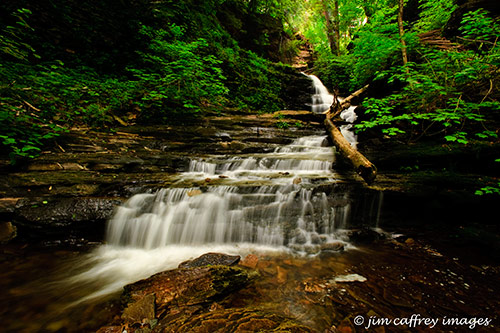 After passing Ozone Falls the trail became noticeably steeper and narrower for a short distance. We stopped at Huron and Shawnee Falls and then continued up through the seemingly endless world of green and rushing water. When we finally made F.L. Ricketts Falls I was looking forward to the end of the trek. I set up a shot and then stepped back to look at my framing options when I saw movement out of the corner of my eye. I turned to see my camera on the tripod fall over and land lens down on the rock. I frantically picked it up to survey the damage. My heart sank when I saw that the Neutral Density filter was shattered. I tried to unscrew the filter to determine if my lens was damaged, but it was stuck, the outer edge of the filter was bent from the impact. I finally managed to loosen the filter and was relieved to see that the lens was undamaged other than some minor scuffs on the filter threads. 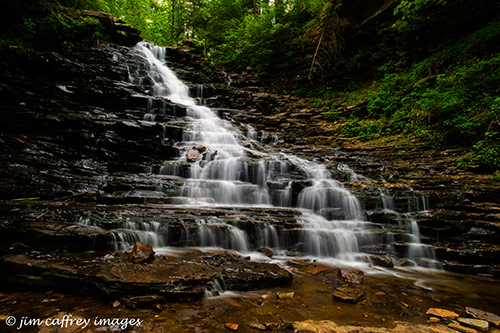 I replaced the ND filter and made the above image of the falls. Then I packed up my gear and we headed up the trail to the last waterfall in Glen Leigh, Onondaga Falls. 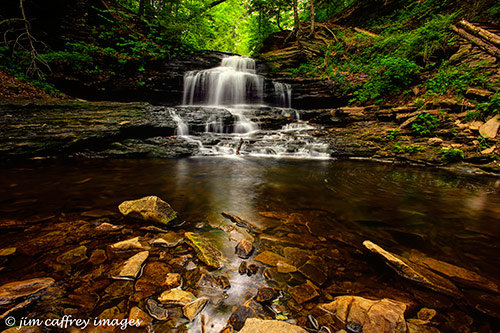 Onondaga resembles Sheldon Reynolds Falls in its shape and the way the plunge pool is formed. As I made this final image, I remember being exhilarated by the experience and although we were both physically drained, we made our way back to the car with a smiles on our faces, talking about the day’s adventure.

This entry was posted on June 30, 2011 by Jim Caffrey Images. It was filed under Journal, Landscapes and was tagged with geology, Pennsylvania, Photography, Ricketts Glen, rivers, water, waterfalls.