I recently read a comment thread on a well known social media site in which the person who originated the thread was trying to make the point that shooting in RAW format is not for everyone. Well, the lines were drawn and the battle ensued. Most of those involved seemed to be missing the point that the author was trying to make. One fellow went so far as to say that shooting jpeg was more demanding because you need to get your exposure right in camera. That’s true, but he seemed to skip over the part where a good deal of the image data is thrown away when the file is compressed, while a RAW file preserves all of the image data to be developed later in the digital darkroom. He then went on to say that–I’m paraphrasing here–shooting RAW is for geeks who would rather spend time in front of their computers than be out shooting images.

Well, I never considered myself a geek, but I do spend a fair amount of time post–processing my RAW files. And, I get a great deal of satisfaction from the act of finessing the image and taking it from its RAW state to a final polished image that can be printed on a wide format printer without loss of detail. There was another photographer, somewhat more well known than I am, by the name of Ansel Adams who spent a great deal of time in the darkroom–a darkroom geek I suppose. Adams was famous for his virtuosity with not only the camera, but for his manipulation of his images in the darkroom, where he would spend hours printing images that would go on to stir the souls of many.

Now, I’m certainly no Ansel Adams, but I do realize what he knew all those years ago. The process of making a remarkable, print-worthy image does not stop after the shutter is released. That’s where the photographer’s vision is captured surely, but bringing that vision to its fully realized state requires some post camera work in the darkroom whether it be a film, or digital capture. If spending time in front of my computer to make my images speak to the viewers in the way that I first visualized them makes me a geek, then so be it. I’m in good company. 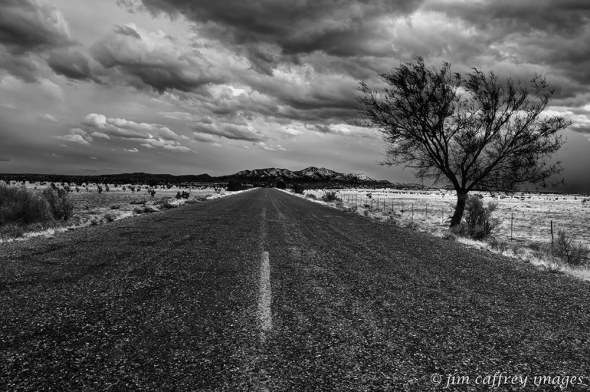 I have been spending a lot of time in the Rio Puerco Valley lately. One of the big attractions (for me anyway) is the ghost town of Guadalupe, NM. The main road through the valley, County Road 279, runs right through the middle of it. Guadalupe is not much at first glance: a number of ruined adobe houses, one of them a large two story, and what’s left of a church. Oh, and an outhouse right on the side of the road. 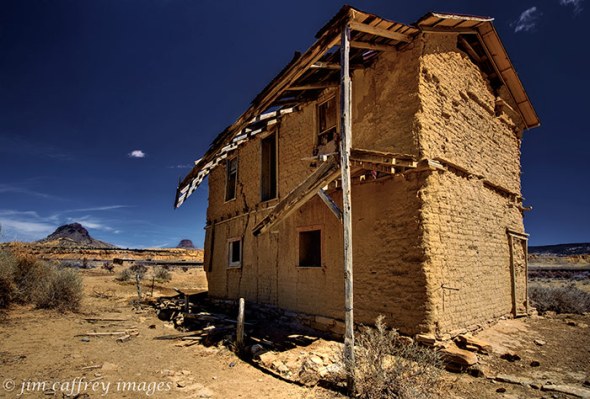 But, if you stop and explore the place, you begin to notice the little things that give some clues about the people who lived here when it was a thriving ranching community back in the early part of the last century: niches in the crudely plastered adobe walls, candles, crosses on the walls. In one house, there is an eerie scene: a bed with the covers turned down, a shirt and hat hanging on the wall as if the occupants just stepped out to tend the sheep. I suspect that whomever these things belonged to was a more recent resident of Guadalupe, perhaps someone who was just squatting here and then vanished like those who came before. 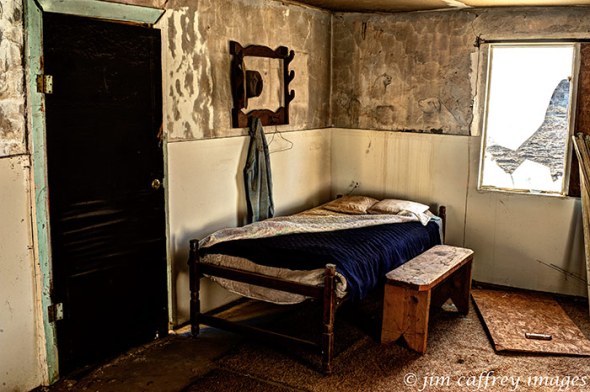 When I stand amidst the ruins and look around at the horizon (which is broken by volcanic cones), and the broad swath of the Rio Puerco, I wonder what it was that drew these people to such a harsh land. I know that it was overgrazing which caused them to eventually abandon the place. Places such as this are fragile. Anyone who attempts to make a living off the land  must do so in a measured way, or they will likely be driven out leaving small clues to their presence for some future wandering photographer to ponder. 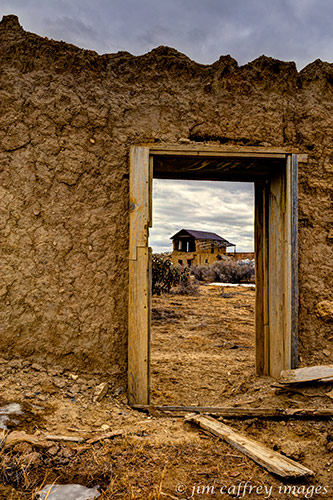 I have been taking stock of my creative drive, attempting to disassemble it and discover what makes it tick. What I have found doesn’t surprise me. I have known it all along, but putting it into words seems to help sustain it. One of the things that drives me is a love of inclement weather: snow, rain, stormy skies–I could do without wind. When the weather turns foul, my spirit soars. I get a funny feeling in the pit of my stomach, and anything seems possible. 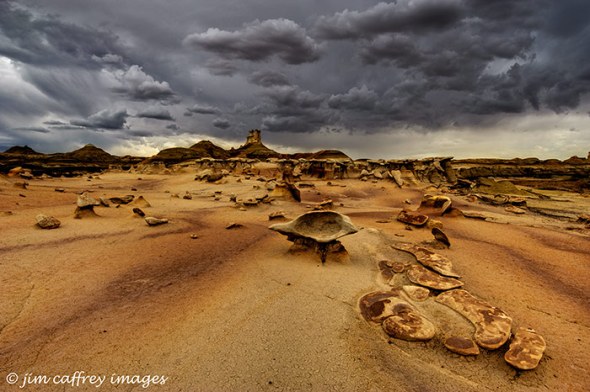 If I can throw a remote location into the mix, then I’m a happy camper. Mother Nature in all her power and glory! Both of these images were made in such locations, under such conditions. The first one is The Eagle’s Nest in the Bisti Wilderness. It had just started to rain, a typical New Mexico summer thunderstorm. I have to admit that I was a little concerned about being several miles from the car, in wide open spaces with lightning flashing, but the muse told me to just make the best of it. I named this image after her. 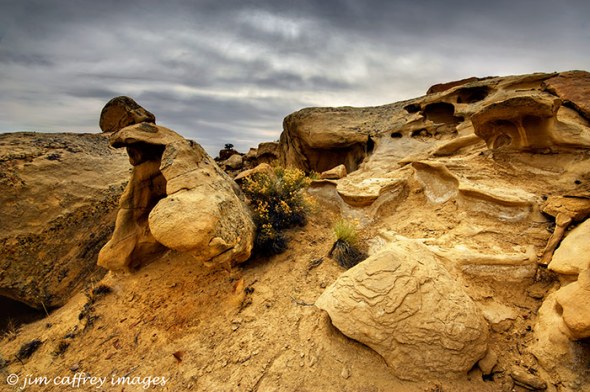 The second image was made on the side of the road between San Luis and Torreon, NM–Yes you can find stuff like this just lying around next to the road, all you have to do is get out and look for it. I didn’t go more than a hundred yards from the car to make this photograph. Unlike the Bisti image, there was no immediate threat of rain and shelter was within easy reach, but that did nothing to diminish the pleasure and satisfaction I got upon releasing the shutter.

The Road And The Sky

In keeping with my fascination with our connection to, and impact on the natural world, I have been making road images. There was a time not too long ago when I would go to great lengths to keep anything that smacked of the human hand out of my photographs. But, I have come to realize that it’s not really necessary to hide the things that we have “contributed” to the landscape. An open road in a remote location can create a powerful resonance in the human psyche, and so I hope that this realization can contribute to my ongoing, and (hopefully) never-ending growth as an artist. 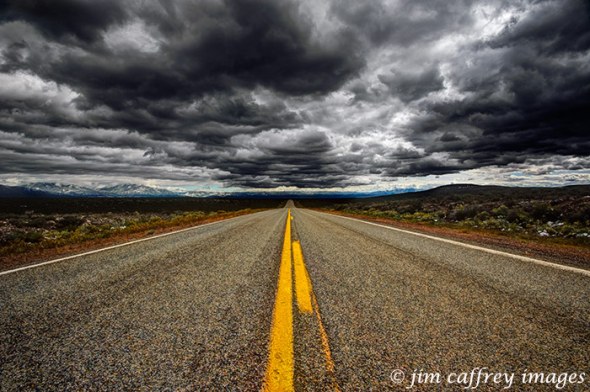 This first image was made on US  64 west of Taos, NM, a few miles beyond the Taos Gorge Bridge. The atmospheric conditions were incredibly dramatic and that long stretch of empty highway was looking like the road to infinity. I love the possibilities that are implied by that vanishing point!. 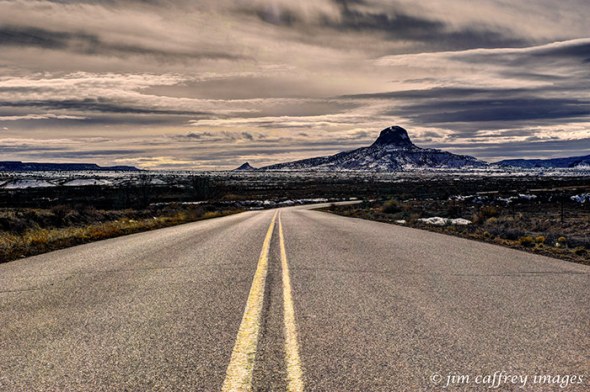 Here is another photograph that suggests the same hope (or fear) as the first image. Sandoval County Road 279 runs south off NM 44 about eighteen miles north of San Ysidro. For nine miles or so it is paved. A short distance beyond the village of San Luis, it turns to dirt and continues past the ghost town of Cabezon and through the Rio Puerco Valley. This is a desolate part of the world, but in such places my spirit is renewed. 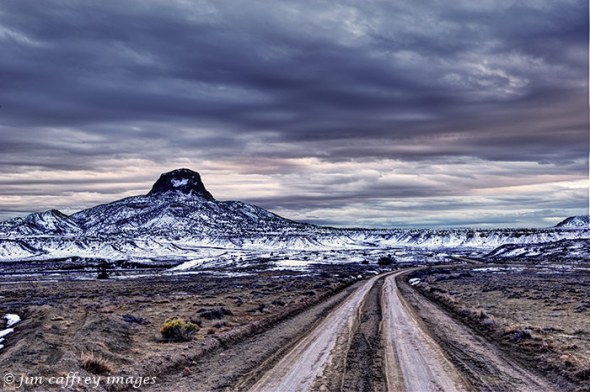 And finally here is an image of BLM Road 1103 which splits off County Road 279 close to Cabezon. From this point, it crosses the Rio Puerco and continues on past Cerro Santa Clara and Cerro Guadalupe, and then farther south along the eastern edge of the Rio Puerco. These roads whether paved or dirt give us access to the places that quench our thirst for wilderness, and for all those unknown destinations we have seen only in our dreams. 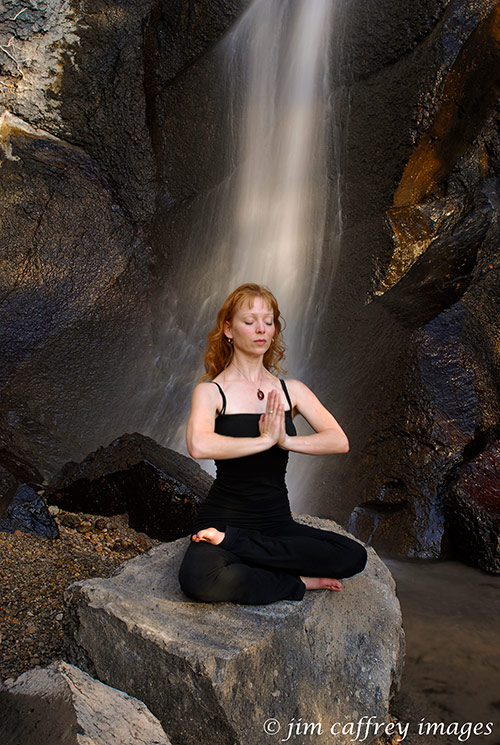 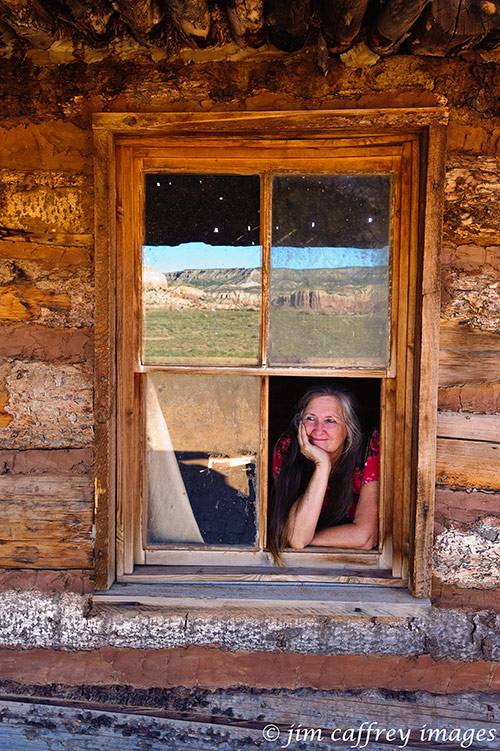