Wheels In The Landscape

There was a time not so long ago when I would have gone to extraordinary lengths to exclude anything man-made from my images. But I slowly came to realize that I was being narrow-minded and losing some great photo opportunities. After removing the blinders from my artistic vision I suddenly became aware of new possibilities with subjects I would have previously rejected without a second thought.

I first came upon this car about five miles from where it now sits in the Rio Puerco Valley. I had made a second trip to its original location only to find it had been removed. I thought it odd that someone had gone to the trouble of dragging it out of the small side canyon accessible only by a two track dirt road, but then I thought that perhaps the BLM was making an attempt to tidy up the valley. It is, after all, a wilderness study area. Imagine my surprise to find the old, rusted, topless vehicle parked (for lack of a better word) in the “yard” of a tumble down adobe/rock house not far from Cabezon Peak.

I made this second image while driving through the panhandle of Texas. This whimsical installation lies along Interstate 40 east of Amarillo; I had my youngest daughter in mind when I was making the exposures. She loves VWs.

The image of the bus and the car were made along Torreon Wash near the Empedrado Wilderness Study Area near Cabezon Peak in the Rio Puerco Valley. The bus sits on rusted wheels and is full of old insulation and rat droppings suggesting that it is (was) being used as a storage shed for some nearby construction.
The car sits near an adobe/rock ruin. It is sunk to the rims in the clay soil and so its fate appears to be sealed.

This 1950s era Ford is parked in front of one of the rooms at the Wigwam Motel in Holbrook, Arizona. There are several other old vehicles parked in front of other rooms. I can’t be positive, but I highly suspect that the creators of the Disney animated movie “Cars” may have used the Wigwam as a model for the motel in the movie. 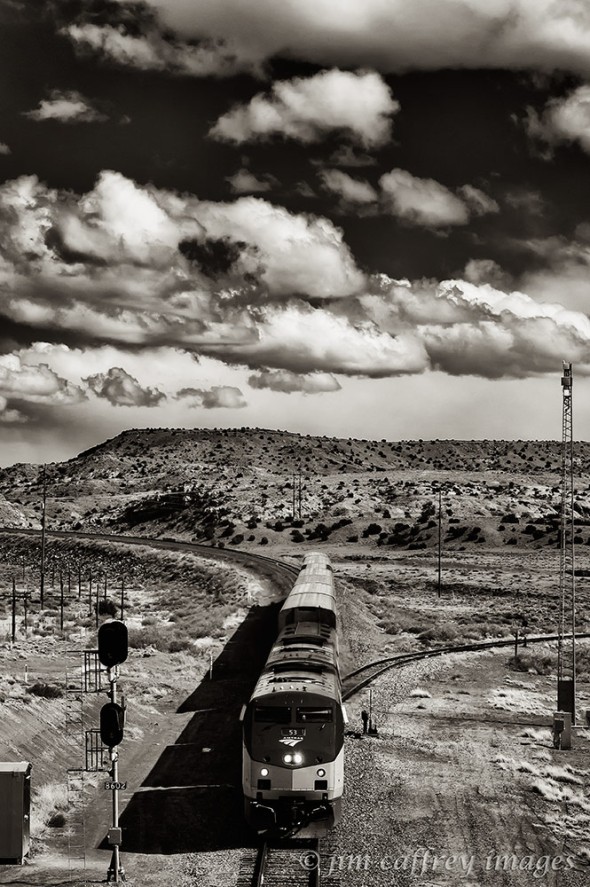 The last image was the result of accidentally being in the right place at the right time. I was driving from Albuquerque to Los Alamos by way of Santa Fe. I pulled off I-25 at the exit where the AT&SF rails cross beneath the interstate. My plan was to get down on the tracks to make an image for my Road Series (as in rail ROAD). As I was walking across the bridge above the tracks on the frontage road, I heard the whistle and soon after that I saw the Amtrak Southwest Chief come through the cut and approaching the bend in the distance.