The Badlands Of The San Juan Basin

The San Juan Basin is a large, roughly circular, depression that lies in the northwest corner of New Mexico, and is a part of the larger Colorado Plateau. What makes the basin special is the fact that, at one time, it was in an area that was covered by the Western Interior Seaway, a prehistoric body of saltwater that split the North American continent from top to bottom. 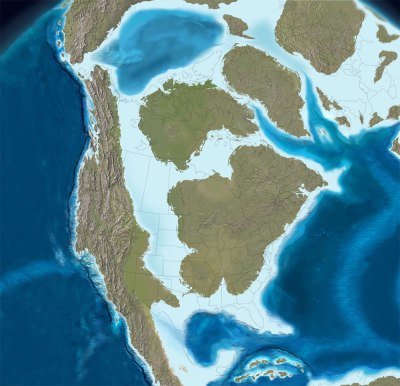 The location along the shores of a large body of water in a tropical climate allowed an incredibly diverse ecosystem to thrive. As these life forms died, they decomposed and were eventually covered by volcanic ash from the eruption of nearby volcanoes. As the seawater covered the area more sedimentation sifted over the remains and some of the sediment was infused with mineral rich water that seeped through the layers above making it harder than the surrounding matrix. This was an important step in the formation of the present-day hoodoos. The weight of the water compacted the entire assemblage, and it was lost to the the world above the waves.

About 65 million years ago, the waters receded and a layer of sediment nearly two miles thick was left behind. Since then, plate tectonics, volcanism, and glacial erosion have helped to shape the present-day San Juan Basin. Further erosion from wind, water, and annual freeze/thaw cycles exposed the hardened sediment layers which eroded more slowly than the softer sand/ash matrix. The result is a wonderland of hoodoo gardens that are especially obvious along the edges of the many washes that criss-cross the basin. Some of these drainages such as Ah Shi Sle Pah, Hunter and Alamo–the two washes that formed the Bisti, and their tributaries have carved and exposed a treasure trove of unlikely works of earthen art.

The human history of the badlands is of course relatively short. Probably the most significant event in shaping the area in the last hundred years was the discovery of coal and the associated coal-bed methane. By the early 1980’s coal mining, mostly to fuel the nearby Four Corners Power Plant, was consuming large tracts of land throughout the basin. Inevitably, the Bisti became the center of a lawsuit between the Public Service Company of New Mexico and the Sierra Club; PNM already had a mining operation there and it looked like it might become just another large open-pit mine. However, the courts sided with the Sierra Club and in 1984, the Bisti was awarded wilderness status. In recent years, Ah Shi Sle Pah has also become a Wilderness Study Area. So, at least for the present, these gems are safe from the insatiable maw of “progress”.

Of the nine recognized badlands in the San Juan Basin, the Bisti is the largest–at 30,000 acres–and most well known. It includes the Kirtland and Fruitland geologic layers and was deposited 70-75 million years ago. The chief deposits are: sandstone, siltstone, shale, coal, and volcanic ash. Fossils include remains of T-Rex and large cypress-like conifers. 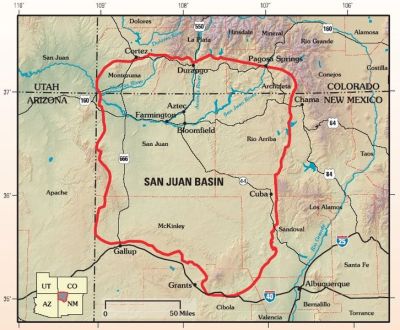 The map shows the boundaries of the San Juan Basin. Rather than being formed by volcanism like the San Juan and Jemez Mountains to the north and east, the basin was uplifted as a single block after which the center collapsed to create the basin.

The idea for this post came from a show I had last year called Badlands Black and White. I chose to print all the images in B&W in order to focus on the graphic elements: tone, texture, patterns, etc. 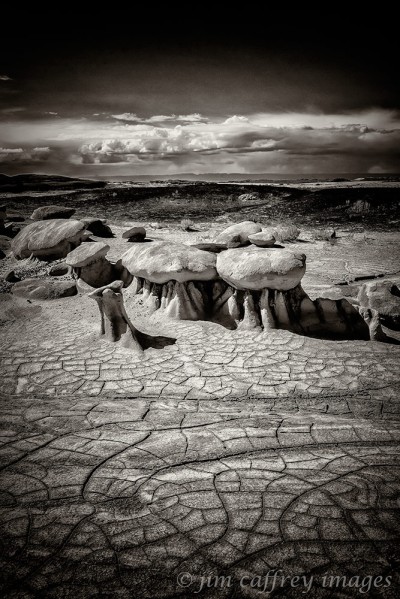 This image was made in Alamo Wash in the Bisti Wilderness. The cracks that result from the shrinkage of the clay rich soil tell a story of the arid environment. The sandstone balanced on the short mudstone pillars is an example of the hardened sediment and how it weathers in relation to the softer layers below it. 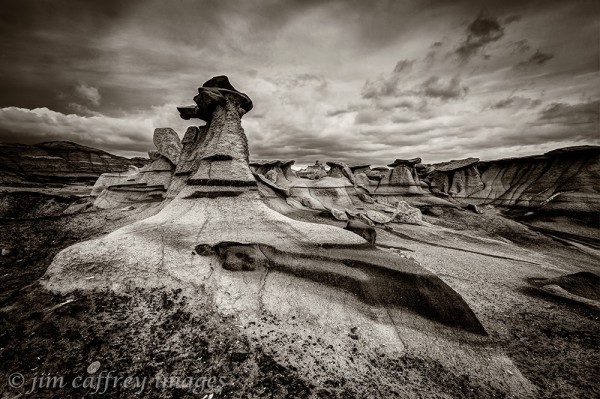 The floor of most badlands is usually littered with small pieces of debris, which is comprised of bits that have broken or eroded from larger structures. They can be shale, clinkers (super-heated clay), siltstone, or even glacial deposits from the last ice age. There are often fossilized bone and clamshells mixed in with all or some of the above. 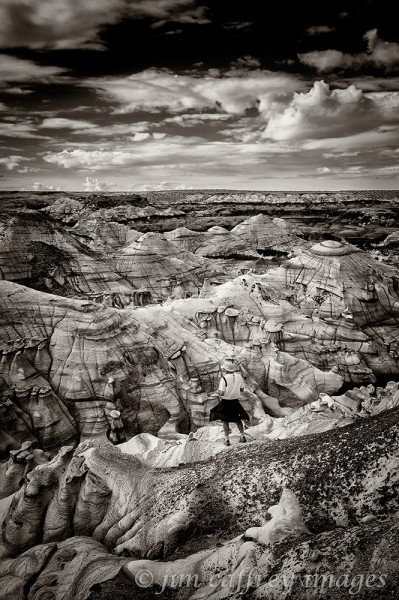 I made this image of a client while leading a tour in the Bisti Wilderness. The man is standing on an ridge above a deep wash in the Brown Hoodoos section of the wilderness. I wanted to give the viewer a sense of scale and the feeling of being lost in the bizarre surroundings. 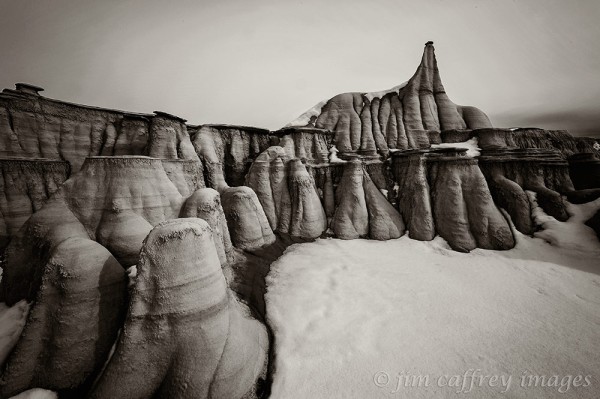 These eroded pillars are in a small alcove located in a tributary of Ah Shi Sle Pah Wash. Some of them still have their sandstone caprocks, while some have lost theirs. The badlands are an evolving story of creation and degeneration, once the protective cover of the caprock is gone, the erosion process proceeds at a much faster pace. 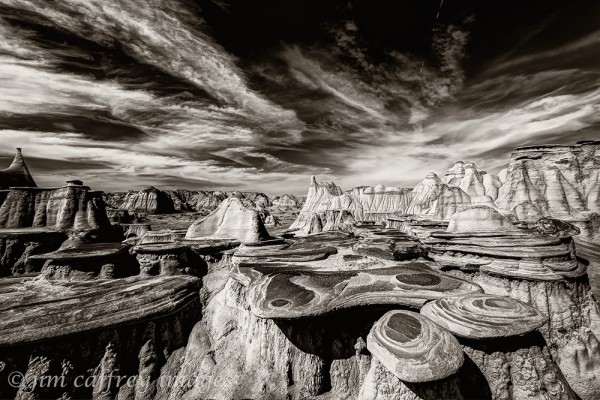 This image is from Ah Shi Sle Pah Wash. The squat hoodoos in the foreground are relatively new and haven’t weathered out to the extent that some of the taller, more widely spaced ones have. Like many of the places I frequent in the badlands, I can’t visit this one without making several exposures. 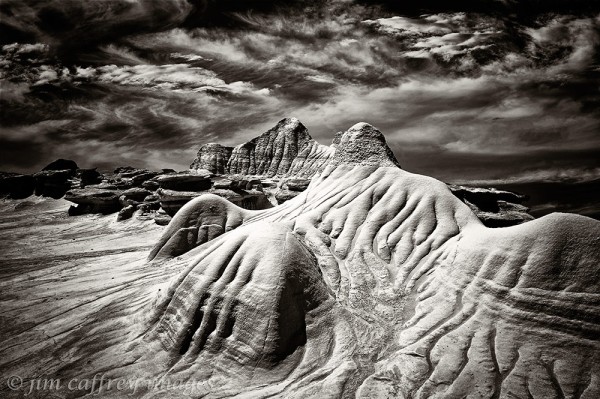 At Ah Shi Sle Pah, there is a small, raised enclosure; I call it the Dragon’s Nest. What caught my eye the first time I saw it were the patterns and textures eroded into the solidified volcanic ash. This formation, at some time in the past, probably had a sandstone cap-rock. 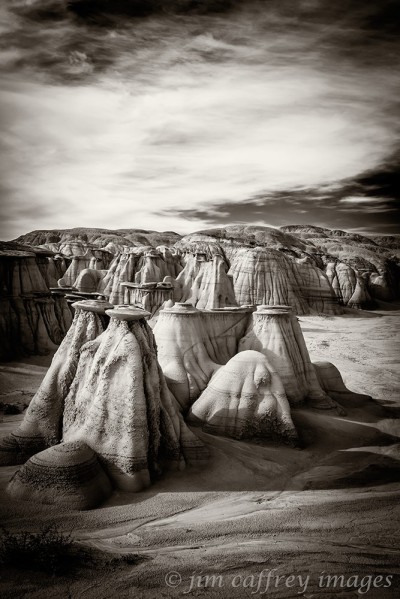 I made this image in Ah Shi Sle Pah Wash. This collection of hoodoos sits in the middle of a labyrinthine tributary wash. The small column on the right has lost its caprock and is undergoing accelerated erosion. 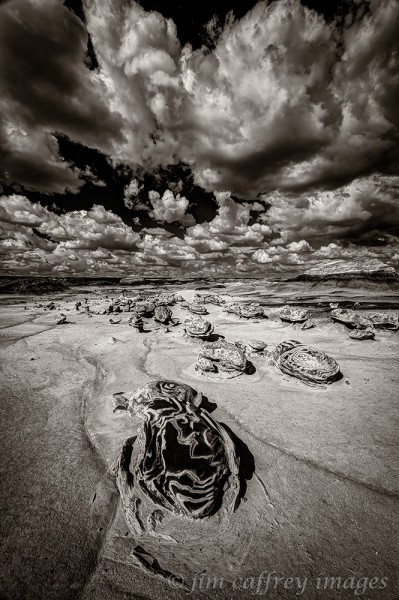 This is a formation in the Bisti Wilderness that I call the Queen Bee. It is part of a small area of similar formations known as the Egg Garden. The cylindrical shape of these eroded forms is due to them being formed and hardened inside limestone tubes. As the surrounding layers eroded away, they emerged as distinct egg-shaped forms. The Egg Garden is one of the most popular attractions in the Bisti. 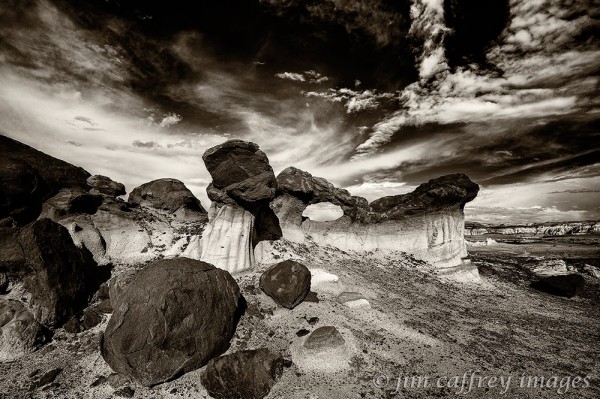 This small arch is another feature that brings people come from around the world to visit the Bisti Wilderness. The Bisti Arch can be deceiving; the opening is only about three feet across and half as high. The first time I found it, after searching unsuccessfully during previous visits, I was surprised by how small it is. The top of the arch is made of siltstone supported by a volcanic ash pedestal, and was once part of a wall which stretched across Alamo Wash. 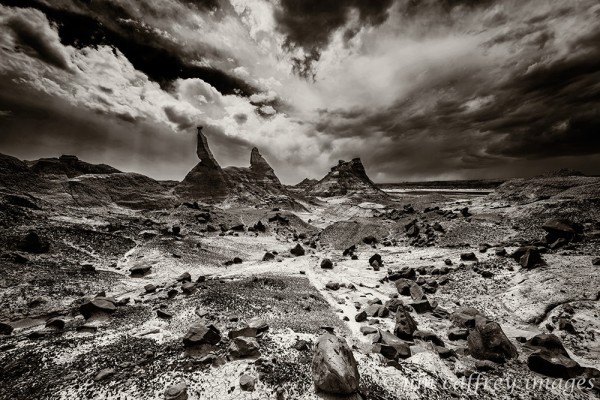 In his book “Bisti” which was printed in the 1980’s, David Scheinbaum included an image of this formation with the caption: “This unstable hoodoo is just within the Sunbelt coal-mining lease and will probably be destroyed by mining in the near future.” I made this image on a recent trip to the Bisti Wilderness, and I’m happy to report that the unstable hoodoo is still standing.