The plan was to explore a small badlands on the Navajo Reservation. It is close to the settlement of Burnham, which is about half way between New Mexico Rte. 371 and US 491. I packed up the car early on July 4th and headed into the expanse of the San Juan Basin.

Looking across the Burnham Badlands towards Shiprock

I have been wanting to make the drive across route 5 for some time, but I always put it off. The first half of the drive is unremarkable: a straight track across high desert grassland. As the road drops off the plateau, however things begin to get more interesting; the view opens up and you can see across the lowlands clear to the Chuska Mountains along the Arizona border. There are several volcanic plugs visible, including Shiprock on the distant northwest horizon. 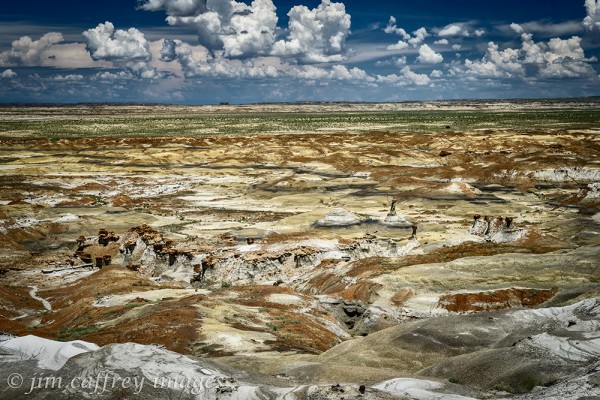 Clay hills and hoodoos in the Burnham Badlands

These first two images show the landscape looking across the badlands from the top. One shows Shiprock in the distance, and the other is a view of the main part of the badlands area. The route to the bottom is gained by finding a trail across the bentonite hills and between the numerous small washes that drain the uplands. This is where a good GPS system was invaluable, The “breadcrumb” feature made it relatively easy to follow the path back to my car.

When I reached the bottom, I made my way to the most prominent feature, a tall gracefully eroded hoodoo atop a small mound. The colors are mostly yellows, blacks, and reds, the subtle gradients made an interesting compositional element, as did the small boulders strewn across the floor of the wash.

I had heard about a petrified stump somewhere in the area and I set out to locate it. I started by skirting the margins of the flats, moving in and out of each small drainage. I really had no point of reference, but since these badlands are relatively small, I felt confident that, if I kept looking, I would find the stump. I stopped to make a photo near the southern edge of the main wash and as I turned around to continue my search, I saw what I was looking for on the opposite side of a low outcropping. What I found most interesting about this particular piece was the nearly intact root extending down as if it was still doing its job of delivering water to the tree; such a commonplace relationship frozen in time and space.

I continued exploring for the next couple hours and found more petrified logs and small hoodoo groupings before making my way back to the car. As I began the climb back to the top, I made a photo across one of the tributary washes to the jumble of bentonite mounds that surround the lowlands.

As I continued the climb out, I made several more images, including the one below, looking westward to the Chuska Mountains. I was thankful for my GPS, I had to reference the “breadcrumb” feature a couple times to find my way out of the maze.

Looking across the Burnham Badlands towards the Chuska Mountains

When I reached the car, I realized that it was still relatively early in the day. Looking out over the landscape, I once again saw Shiprock on the horizon and decided to drive there to photograph it at sunset, hoping for some nice color in the overcast sky. I returned to IR-5 and continued west to its junction with US 491 and then headed north to my destination.

Shiprock glows as the sun gets low in the west.

I drove onto the dirt road just east of the lava dike and followed it for a couple miles until I found a good spot and began the wait; there was still a couple hours to go before sunset. I set up my camera and tripod, made a few exposures, and repositioned the setup. I then settled in to wait for the anticipated light show. I made exposures whenever the light was interesting, and read a book I had brought along to help pass the time. In the end, sunset was not what I had hoped it would be, the clouds grew more dense obliterating the evening light and muting what little color there was. But, I had plenty of images with some nice light to choose from. This is my pick out of those, the side-lighting does a nice job of revealing the rugged texture of Shiprock, and also casts a nice glow across the foreground.

I drove to Farmington to spend the night satisfied that I had come away with some good images. I decided that I would extend the trip through the next day and see where the wind would take me.