At last, a real winter! One we denizens of the Jemez Mountains can be proud of. We’ve had two substantial snowfalls within the past two weeks, and there is more in the forecast. The day after Christmas I awoke to a world of swirling white. I quickly got dressed and grabbed my gear. There is nothing like being cloaked in the clouds during a fresh snowfall to bring the world into focus.

Jemez Springs has become a “destination”, the road and the village are typically busy with tourists, so it was a welcome relief to see it relatively abandoned with clean, new snow covering the small cluster of buildings that comprise the heart of the village. Luckily, the road hadn’t even been plowed yet. 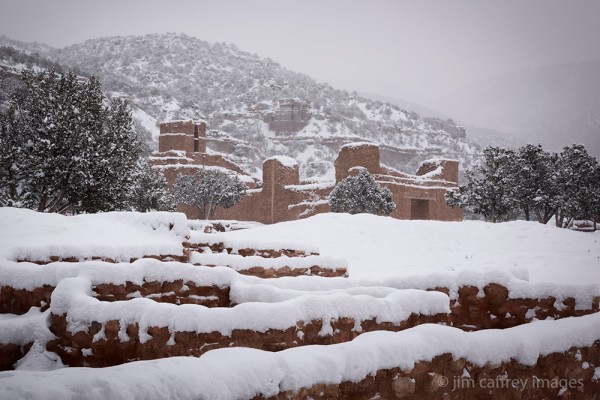 The Jemez Historic Site (the pueblo of Giusewa) is about halfway between the village and my home. I have been wanting to make this image for quite a while, but due to a lack of the white stuff, I had put it off. This was my chance, and I think I made the most of it. This is what I consider to be the best of a series of seven exposures I made of this scene.

Continuing up the road, I came to Soda Dam. I have made many photographs of Soda Dam over the years; it’s only a five minute walk from my house. With the snow still coming down, I decided to give this image the same treatment as the one of the village seen above. I used a relatively fast shutter speed of 1/250th of a second to freeze the motion of the falling snow. The resulting image puts the tableau in context and serves to convey what I was feeling at the time I released the shutter.

After leaving the Soda Dam, I continued north on the highway into the Santa Fe National Forest. The most striking scenes I found were the ones of areas of forest burned in recent wildfires, their branches covered and defined by the snow. They provided a visual as well as a thematic contrast, and the photographs are a combination of realism and the abstract.