…strange how old, obsolete buildings and plants and mills, the technology of fifty or a hundred years ago, always seems to look so much better than the new stuff…Nature has a non-Euclidian geometry of her own that seems to soften the deliberate objectivity of these buildings with a kind of random spontaneity that architects would do well to study.

Zen and the Art of Motorcycle Maintenance

Random spontaneity; you can’t get much more un-deliberate than that. Robert Pirsig hit the nail right on the head with that one. Time and the elements have a way of blurring the lines, by the weathering of old wood, by the erosion of brick and adobe, and by the desaturation of colors that seem to make these old, ruined structures a cohesive part of the landscape.

I’ve driven for hours over backroads and two lane blacktops that (refreshingly) haven’t been repaved for decades. One of those roads brought me to Claunch. The village still has a functioning post office, but not much else. This old adobe with just the right amount of color added sits alone waiting for passersby to whom it can tell its story.

The front of this small bungalow near the village of Cerrillos is a hodge-podge of materials; stucco, fake brick, and, underlying it all, plywood. The door is beautifully weathered and the textures are all the more evident due to that weathering.

The thing I like best about this photograph is the cutaway caused by erosion of the adobe wall. It’s like a glimpse into the lives of the long gone inhabitants. The double doors were obviously a replacement of a larger one. The melting adobe gives it all an organic feeling.  To me, these elements speak of lives lived here in times past.

This old wooden shed has been surrounded by Chinese Elm trees. They have grown around its perimeter in an opening gambit to reclaim the ground on which it sits. The scene has a sense of serene finality about it.

I have been exploring the area in and around the Rio Puerco Valley for years and I think I’ve driven just about every road out there. But, there is one that had escaped me until recently. I had driven past it many times, but had always assumed that it was a private road leading to a ranch that could be seen in the distance.

That’s what I get for making assumptions. I recently had reason to study a map of the area for a totally unrelated reason, and discovered that the road in question continued on well past the ranch in a long loop that returned to the main road via a BLM road that I am familiar with. 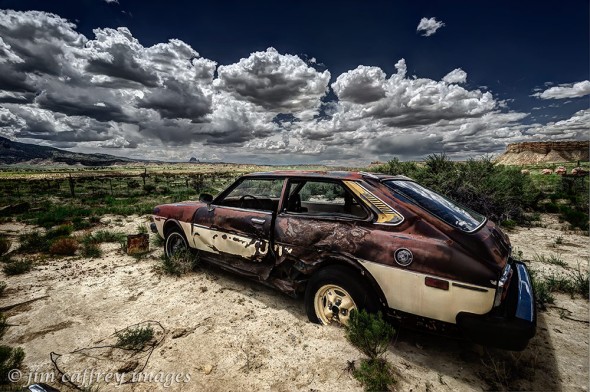 So, this past Sunday we set out to explore what is identified on the map as the Empedrado Wilderness (it’s actually a Wilderness Study Area which means it is being considered for wilderness status). Well, one of the first things I realized is that for a wilderness, there sure is a lot of human impact, both abandoned and ongoing. Of course the former captured my attention.

This stone ruin is perched on the edge of Torreon Wash and if the steep banks continue to deteriorate, it will soon be a pile of rubble lying in the wash. There is something about these recent ruins that touches me. I see the abandoned hopes and dreams of people who were probably toiling here in my lifetime and who may still come to these places to watch those dreams decay.

A little farther along we found this water system that, at first, looked as though it could still be in working order, but upon closer inspection it was found to be, dried up, broken and rusting away. 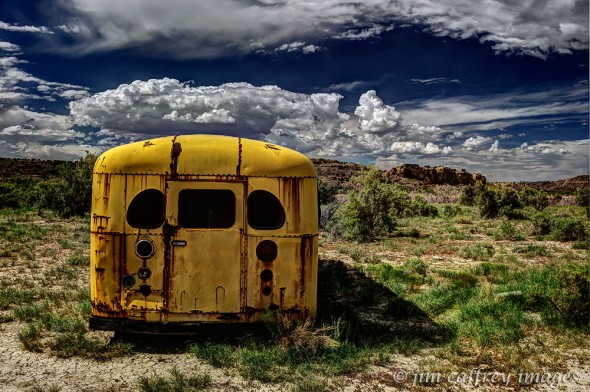 Just around the next bend in the road is an old school bus that is filled with what could be mistaken for building materials. Most of the insulation has become nests for the pack-rats, and other small animals that have laid claim to the bus.

After the first five miles or so, the evidence of human endeavor began to dwindle and the place began to look more like a wilderness. We drove on for another ten miles making note of areas of interest for future exploration. Then, after turning on to the BLM road that leads back to our starting point, I stopped to make this image of an ephemeral New Mexico rain falling over Cabezon Peak.