That Was Then; This Is Now

Yesterday I cleaned my cameras and lenses…all of them. It took me all of the morning and part of the afternoon. I hadn’t handled my Nikkormat FTN in quite a while, but it felt like an old friend which, in fact, it is. It is the first SLR I ever owned; I bought it in 1971 at the PX while I was overseas. At that time, the FTN was a favorite of photojournalists covering the Vietnam War because of it’s sturdy construction. It is now considered a classic. While I had it out I decided to pose it next to my latest DSLR–a Nikon D800. 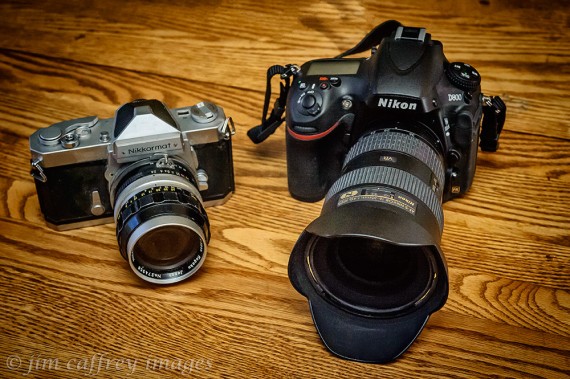 The juxtaposition started me thinking about how photography has changed over the forty plus years since I bought that Nikkormat. There have been many upgrades to the Nikon line in that time; I own several of them: two Nikkormat FTNs, an F3, and two F 100s. But, the changes over the past ten years have actually been a paradigm shift. Of course I’m referring to the advent and rapid growth and development of digital photography.

I wanted to do a comparison of the work I was doing then and the work I’m doing now, so I dusted off my collection of old negatives and prints to see what I could find. In those days, I shot primarily Kodak Plus X (ASA/ISO 125) and Kodak Tri X (ASA/ISO 400). I developed and printed all of these early images in a “wet” darkroom, and although I get a bit nostalgic looking at them, I don’t regret my switch to the digital realm. True to form, once I crossed over I never looked back.

This is a self-portrait I made just before I was discharged from the army. I was really into dramatic side-lighting at that time. I made dozens of portraits of friends from my unit and they are all lit the same way. When I shoot portraits now, I usually use at least one flashgun, on camera or off, umbrellas, reflectors…Seeing these simple available light images makes me realize how effective that kind of lighting can be. I do miss the catchlights though.

My friend Kim Bong In and I went to Inchon to do some sight-seeing. I made this portrait of him at the Inchon Memorial Pagoda. Kim was a DJ at one of the clubs in Tongducheon which is the village next to Camp Casey where I was stationed. He and I became friends during the time I was there, and he introduced me to everyday Korean life, the one beyond the clubs and “working girls” which is all most GIs ever saw. I went to his grandfather’s funeral and was invited to the celebration when his son was born. 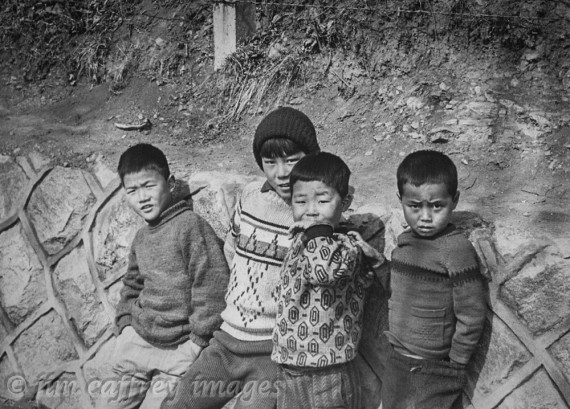 I caught these four young chin-gus (friends) hanging out on a busy thoroughfare in Inchon. Their expressions were all over the map: unguarded disdain, shy curiosity, nervous apprehension, watchful suspicion. Ours was a brief encounter; they went their way and I went mine. But, looking at this image more than forty years later, I wonder how their lives have played out. I wonder if the expressions they wore that day reflected the men they would become.

Once you made your way beyond the  section of the village that tailored to the American servicemen, you found yourself in a different place and time. There were no supermarkets, the people bought their food at small street markets like this one. The woman in the center of the image was obviously in charge. Her produce is arranged rather haphazardly around her, cuts of meat hung in a display window. I was telling a story here. I was in a photojournalistic frame of mind.

I got to know this Korean elder through regular interaction with him in the village. We communicated with pidgin Korean and English. I don’t remember his name, but he was kind enough to pose for this portrait. The one thing I don’t care for in this image is the slight motion blur. Because I was pretty new to shooting with an SLR, my camera technique was not very good. I remember that I usually shot somewhere between 1/125th and 1/200th second, but there were times when I would end up down around 1/60th and this was probably one of those times.

Fast forward to 2014. I have lived in the small village of Jemez Springs, New Mexico for thirty-nine years. Not much has changed as far as the eye can see. It’s a sleepy place, especially on a Wednesday night in January. I handheld my camera while making this image. I dialed the ISO up to where I needed it to get a suitable shutter speed with an aperture of f8. I reduced what noise there was in Lightroom. This would not have been possible with the available technology just a few years ago, let alone in the 1970s.

I’m not big on self-portraits. But, there are times when the location demands one. I spent several years trying to find this stone wing which is located deep in the heart of the San Juan Basin. When I finally located it with some help from a photographer from southern California using Google Earth, the actual experience was a bit anti-climactic. I decided to pose Robin and myself under the cantilever with the waxing gibbous moon overhead.

One thing I’ve learned over the years is that if you want to make good portraits, you need to be able to engage your models. It’s not the easiest thing to approach a stranger and, in a short time, make him comfortable enough to open up to you. So, when I saw this fellow at a powwow last year, I went over and started talking to him. Predictably, he was a bit stand-offish at first, but after a while, the walls came down and he agreed to pose for me. 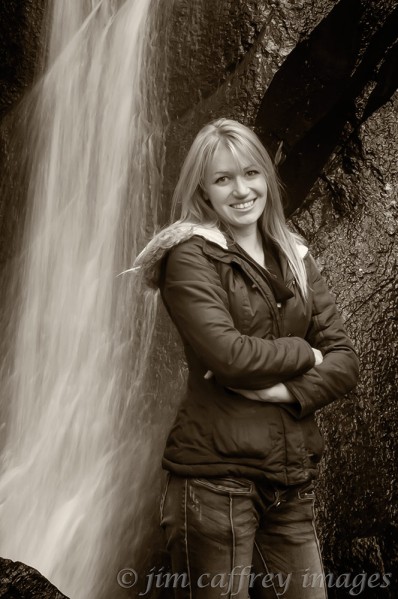 My youngest daughter Susan is a natural when it comes to modeling. I made this image of her at a waterfall not far from my home. It was shot RAW as are all of my images; I converted it to black and white and added a sepia split tone in post processing. This kind of control over the ultimate look of an image is only possible by taking advantage of a RAW workflow. 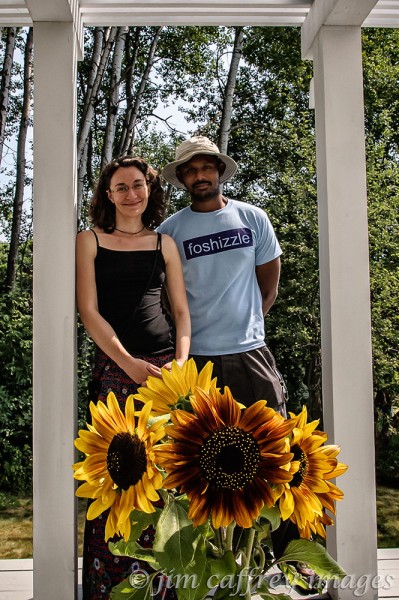 At the end of last summer, I travelled to Wisconsin where my daughter and her husband live. We spent part of that time in Bayfield on the coast of Lake Superior. While relaxing on the porch of the house where we stayed, I made this image of them.

In looking back over my development as photographer, I see that I have come full circle. I am technically more proficient than I was when I started, and the visual journey I have made has enabled me to add another layer to my vision. It’s evolution and that’s what it’s all about.