Somewhere between the sweeping, wide-open views of the grand landscape and the detail of the macro/close-up is the domain of the intimate landscape. It is a world of waterfalls and dense forests where you pluck an image from the chaos that surrounds it.

I have photographed this waterfall many times. It is only a couple miles from my home and I love its graceful sweep against the dark rock wall. When I shoot moving water, I like to use a long exposure–in this case 1.6 seconds–to capture the smooth movement of the cascading water.

It had snowed the night before and was still snowing when I left the house on this January morning. I noticed this scene along the side of the road; I knew there was a photograph there, but I needed to move around to find it. I made several compositions, changing the spacing between the trees each time. This is the version that I settled on.

I first became aware of Hug Point while researching locations for a trip to the Oregon Coast. I saw images of this waterfall and I was intrigued. All the photos I saw were wider angle views than this and that’s where I started. But, as I worked the scene and moved around, I kept being drawn closer to the falls and the wet stones at their base. Later, while editing the images, I didn’t care much for the wider angle versions, but this more intimate portrait became one of my favorites from the entire trip.

I saw this patch of corn lilies growing in front of an aspen grove in northern New Mexico. There is something about these unassuming plants that always make me look for a photograph. The textures and the visual contrast between the shapes in the lilies and the straight vertical lines created by the aspens are what excited me about this scene. I knew as I was photographing it that it would be a black and white image. 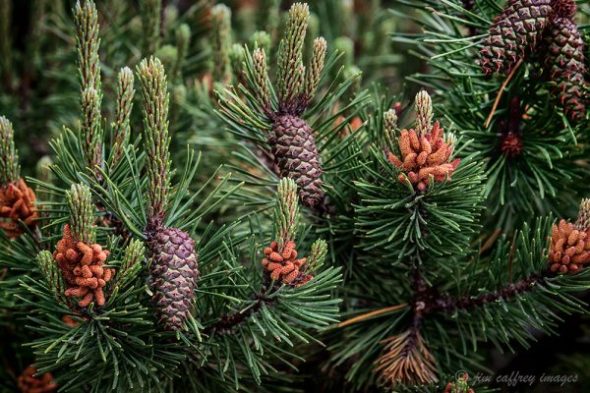 I was camping at Fort Stevens State Park on the Oregon coast and was leaving to head down to Cannon Beach, but decided to explore the area a bit more before heading out. I ended up on the Jetty Road and I drove as far as I could go on it. I was standing where the Columbia River flows into the Pacific just enjoying being there when I noticed this small group of lodgepole pine trees, and this pleasant arrangement of male and female cones nestled in the long needles.

Joshua Trees are a member of the yucca family; they grow in a limited range of the southwest, a range that is being reduced by climate change. I made this image in Joshua Tree National Park. I remember having to maneuver my tripod into position and get low enough so that I had the Joshua placed against the sky and also included the weathered sandstone slab in the foreground.