There is no shortage of adobe ruins in the American southwest and there is also no shortage of photographs of those ruins. This poses a dilemma for photographers who want to find fresh ways of capturing an image. 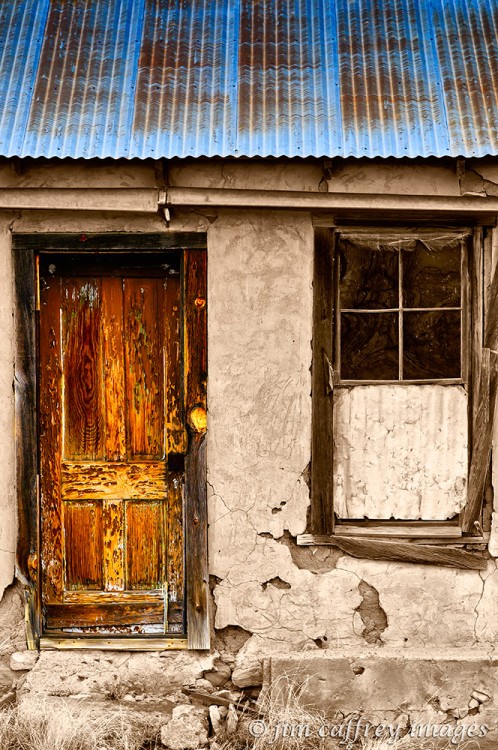 So, how many ways are there to photograph ruins? I decided to share some of my techniques for making eye catching images of an often photographed theme. In the first image, I asked myself: “What drew your attention to this scene in the first place?” The answer: the corrugated tin roof and the color and grain of the door. So, I made a selection of those elements, inverted the selection, converted it to B&W, and added a sepia tint.

I made the second image in the ghost town of Guadalupe, New Mexico in the Rio Puerco Valley. I had photographed the two storey ruin many times, but this time I was looking for something different. I was walking around the small village, in and out of various ruined buildings when I saw this image just waiting for me. By framing the larger building in the doorway, I managed to say more about the entire village while still making a fresh image of the subject.

Here is a more intimate scene. By de-saturating the adobe walls and warming the remaining color, I was able to create the effect of a glow from the inside of this old ruin.

This last image was taken from an overlook several hundred feet above and about an eighth of a mile from the Mummy Cave Ruin in Canyon del Muerto, a side canyon of Canyon de Chelly. I used my 80-200 f2.8 Nikkor lens at 200mm. I thought about putting on my 400mm lens to get a tighter shot, but then realized that this magnification was perfect: it allowed me to show the subject in context; including the towering rock face above the ruin says much more about it than if I would have zoomed in for a tighter crop.